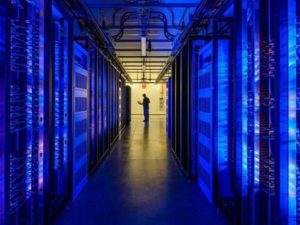 Schneider Electric has created ‘flexible standardisation’ for data centre operators that allows the company to support the different sized deployments its customers require quickly, efficiently and cost-effectively, while eliminating inconsistencies across data centres.

“HyperPod is a rack-ready system for deploying IT at scale in increments of 8 to 12 racks,” explains Riaan de Leeuw, VP for IT Division – Anglophone Africa, Schneider Electric. “Its freestanding support structure allows for air containment to various types of racks and can adapt to a variety of cooling and power configurations.

“It is equivalent to our custom builds, is flexible and scalable enough to fit our varied design concepts, has the quality and appearance we want to deliver to our customers and can be quickly installed with minimum customisation. Basically, the data centre customers just have to bring their servers.”

“In a US case study, Schneider Electric had to create a colocation environment that appeared and operated the same, despite multiple locations. The colocation spaces also had to be configured appropriately to handle dynamic density loads and multi-tenant needs.

“Fitting a 2MW customer and a couple of 500KW customers, in a 4MW space, takes flexibility. In addition, the client wanted its tenants to have the same experience regardless as to their geographic location.

Schneider Electric was on site, putting all the pieces together, implementing HyperPod for the first time and essentially creating a proof of concept to take to any of the other client locations. Once the prefabricated, premanufactured HyperPod arrived, the deployment of a 15-metre length of aisle containment space took only one week, compared to the three weeks it would have taken with old systems.

“Connectivity and data continue to transform the way industries work, how companies interact and how people live. Data centres, server rooms and IT closets all play a critical role in making this happen,” continues de Leeuw.

“The Internet of Things (IoT) has brought an increasingly vast volume of machine data and outsourcing many enterprise applications into the cloud has elevated the importance of resilience in distributed IT environments and edge data centres, all of which redefine the need of availability for a connected and always-on generation of users.

“Clearly, a new and dynamic approach to data centre operations is required and, in addition to HyperPod, Schneider Electric offers data centre operators other technological improvements, such as Ecoflair Indirect Air Economizer and the Galaxy VX UPS,” concludes de Leeuw.

« “Look out, Mac users!” – and other phishing predictions from Cofense Naive employees are the greatest risk to a company’s cyber security »