This post was done in partnership with Wirecutter. When readers choose to buy Wirecutter’s independently chosen editorial picks, Wirecutter and Engadget may earn affiliate commission. Read the full Vitamix vs. Blendtec guide here.

Vitamix and Blendtec are the two biggest names in high-powered home blenders. In our testing, we’ve always preferred Vitamix. We still get asked about Blendtec, though, maybe thanks to its popular “Will It Blend?” campaign, which features a Blendtec pulverizing iPhones and other objects that would taste bad in smoothies. The image of a phone turned to dust is a compelling demonstration of raw power, but pulverizing a phone and making a good smoothie are two very different tasks.

To prove it, we pitted the Blendtec Designer 675 against the Vitamix 5200 (our top-pick blender) in a series of tests, and the Vitamix won every time. The Vitamix was much better at smoothies, soups, nut butters—the things you’d need a kitchen blender for, in other words.

We chose to compare those two models because they offered roughly similar features and control schemes. The 5200 is Vitamix’s original variable-speed model, and it offers the power and performance Vitamix blenders are known for. Vitamix blenders with preset blending programs are more expensive, and we don’t think they’re worth the extra cost. Meanwhile, lower-end Blendtec machines have only preset blending programs, and the Designer 675 is the lowest-priced model that offers manual speed control in addition to those settings.

Dense mixtures tend to form air pockets around a blender’s blades, so you need a tamper (the plastic bat that comes with some high-powered blenders) to push the food down and break those pockets up. As you can see in the video above, a tamper is especially important for blending thick smoothies. Unfortunately, the Blendtec Designer 675 (left) doesn’t come with a tamper, whereas the Vitamix 5200 does, and the difference is obvious.

The video shows our attempts to puree the same super-thick smoothie (made from carefully weighed portions of frozen berries and bananas, kale, almonds, and coconut water) in both machines. You can hear the blades of the Blendtec spinning uselessly while the Vitamix makes fast work of pulverizing the kale and frozen fruit into a soft-serve-like consistency—all because we were able to use the Vitamix’s tamper to keep the mixture engaged with the blades.

Blendtec claims its blender design doesn’t need a tamper, but that’s obviously not true for a challenging job like this one. If you wanted to make a smoothie this thick in the Blendtec, you’d have to constantly stop the machine to give the mixture a stir, adding minutes to your blending time. The Vitamix, in comparison, did the job for us in about 30 seconds.

Another thing to notice in this video is the difference in jar shapes. Vitamix’s tightly tapered jar effectively pulls ingredients toward the blades and helps create a steady vortex. The flat-bottom Blendtec jar, on the other hand, hurls ingredients out to the sides, away from the blades.

Not only does this piña colada face-off reinforce our argument for a tamper, but it also illustrates the noise and pitch difference between the Blendtec Designer 675 (left) and the Vitamix 5200 (right). Blending ice cubes is about as noisy as you can get with a blender, and in our tests the Vitamix hovered around 93 decibels, while the Blendtec ranged between 90 and 106 decibels during a single blend. But the real difference is in the pitch: We prefer the Vitamix’s low-level hum over the Blendtec’s high-pitched squeal.

Also, you can’t see it in the video, but we had to take twice as long to make a piña colada in the Blendtec as we did in the Vitamix. After a minute of blending on the Blendtec’s highest speed setting, our piña colada still had gritty bits of ice in it, whereas with the Vitamix our ingredients became a beautifully slushy drink in about 30 seconds flat.

This boiling cyclone is not what you want to have happen in your blender, especially if you forget to put the lid on. Video: Michael Hession

Blending hot soup is a potentially perilous task no matter which blender you use: If the motor starts out at a high speed, the combination of steam, heat, and whirring blades can send a geyser of scalding liquid out the top of the jar. That’s why we prefer the nuanced speeds of the Vitamix 5200 over the wild power of the Blendtec Designer 675 for pureeing hot soup and sauce. The Vitamix’s lowest speed is subdued enough to guarantee that your ingredients will stay inside the blender jar. And the easy-to-use dial allows you to safely and gradually increase the blending speed while keeping the ingredients spinning in a neat, controlled vortex.

The combination of a restrained low speed and a narrow tapered jar helped the Vitamix 5200 puree hot liquids in a tight and controlled vortex. Video: Michael Hession

The Blendtec Designer 675, on the other hand, is so forceful that it creates a boiling cyclone, even on the hot-soup setting, which is meant to start out slow and blend hot ingredients safely. We also tried starting our soup on the lowest manual speed setting, but that was too aggressive as well. In both cases the powerful motor flung ingredients up the sides of the jar, especially in the beginning when solid foods hit the blades. We’ve never been injured from blending hot liquid in the Blendtec because we make sure the lid is secure and we don’t overfill the jar, but just seeing the fluid dynamics in action is enough cause for concern.

This is what a mayonnaise fail looks like, and it’s the only result we’ve ever gotten from the Blendtec Designer 675. Video: Michael Hession

If you’ve ever made mayonnaise from scratch, you know there are only two possible outcomes: You have either a smooth, white, emulsified spread or an oily, broken mess. A blender should make the process faster and easier, and reduce your chance of failure. But we’ve failed every time when attempting this simple emulsification of oil, egg yolks, mustard, and lemon juice in the Blendtec Designer 675. By contrast, we’ve never had issues whipping up silky mayo in the Vitamix 5200. We believe the difference lies in the bottom of the jar.

To understand why the Blendtec fails at mayonnaise, you need to understand how emulsifying works. When making an emulsification, you slowly add oil to an emulsifier (that’s yolks, lemon juice, and mustard in this case) while vigorously agitating the mixture to break up the oil droplets and suspend them in the emulsifier. A blender is usually great for making mayonnaise because its fast-whirling blades can whip the oil into the emulsifier more efficiently than you could by hand. But the first few moments of blending are crucial, because the emulsification must start forming as soon as the first drops of oil hit the emulsifier; otherwise you end up with a pool of oil too large to incorporate into the mixture. In order to start emulsifying immediately, the blades of the blender should be already beating the emulsifier before you introduce any oil to the mix.

The Vitamix succeeds at mayonnaise because the narrow base of its jar keeps the tiny volume of emulsifier close to the blades, which sit low enough to beat even a small amount of yolks, lemon juice, and mustard. In comparison, the Blendtec’s blades sit higher, and the emulsifier spreads out in a thin puddle over its wide base, so the blades can’t whip the eggs until a few tablespoons of oil are present—after which, an emulsion will never form. 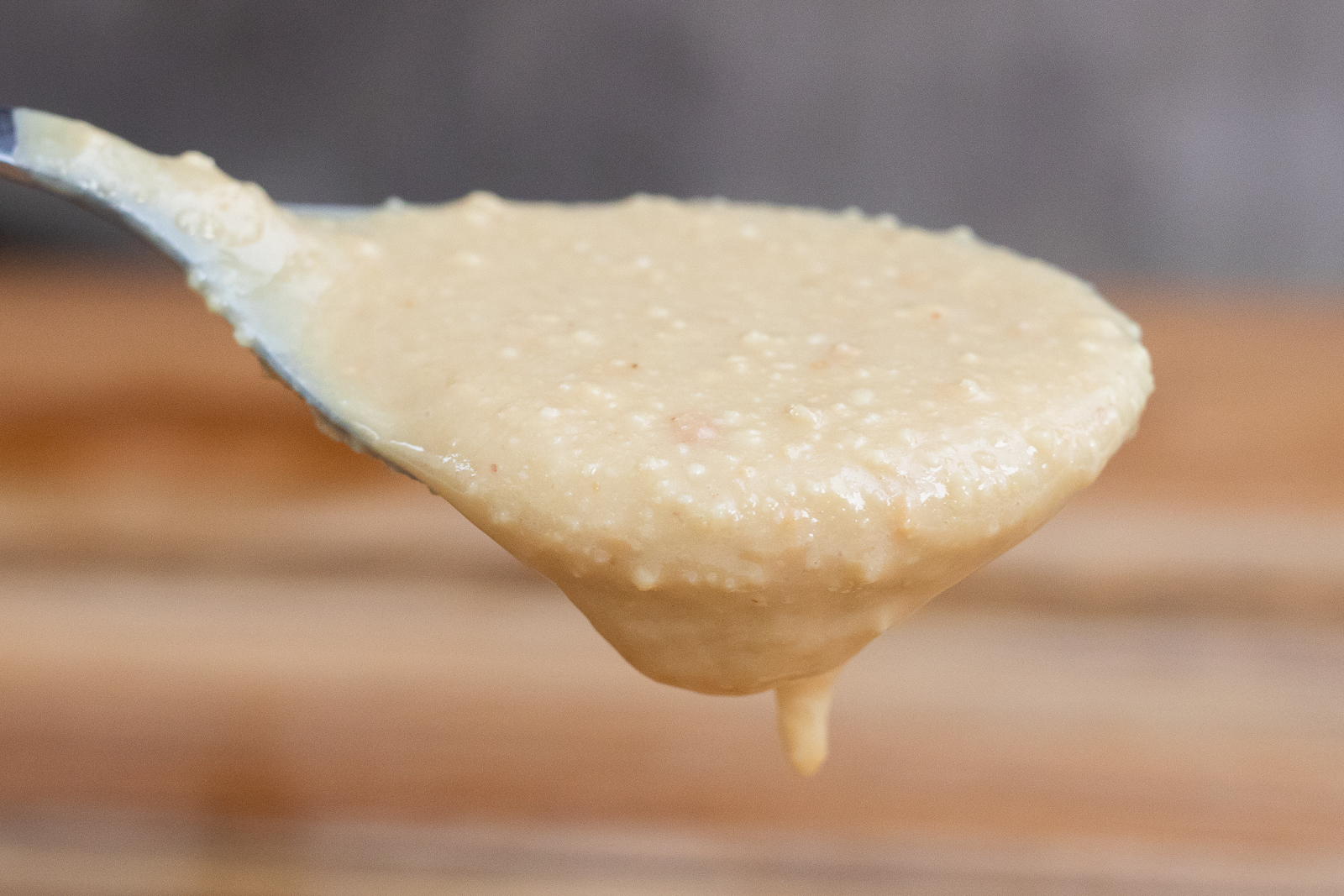 The Blendtec made a very thin, chunky peanut butter in our tests. Photo: Michael Hession 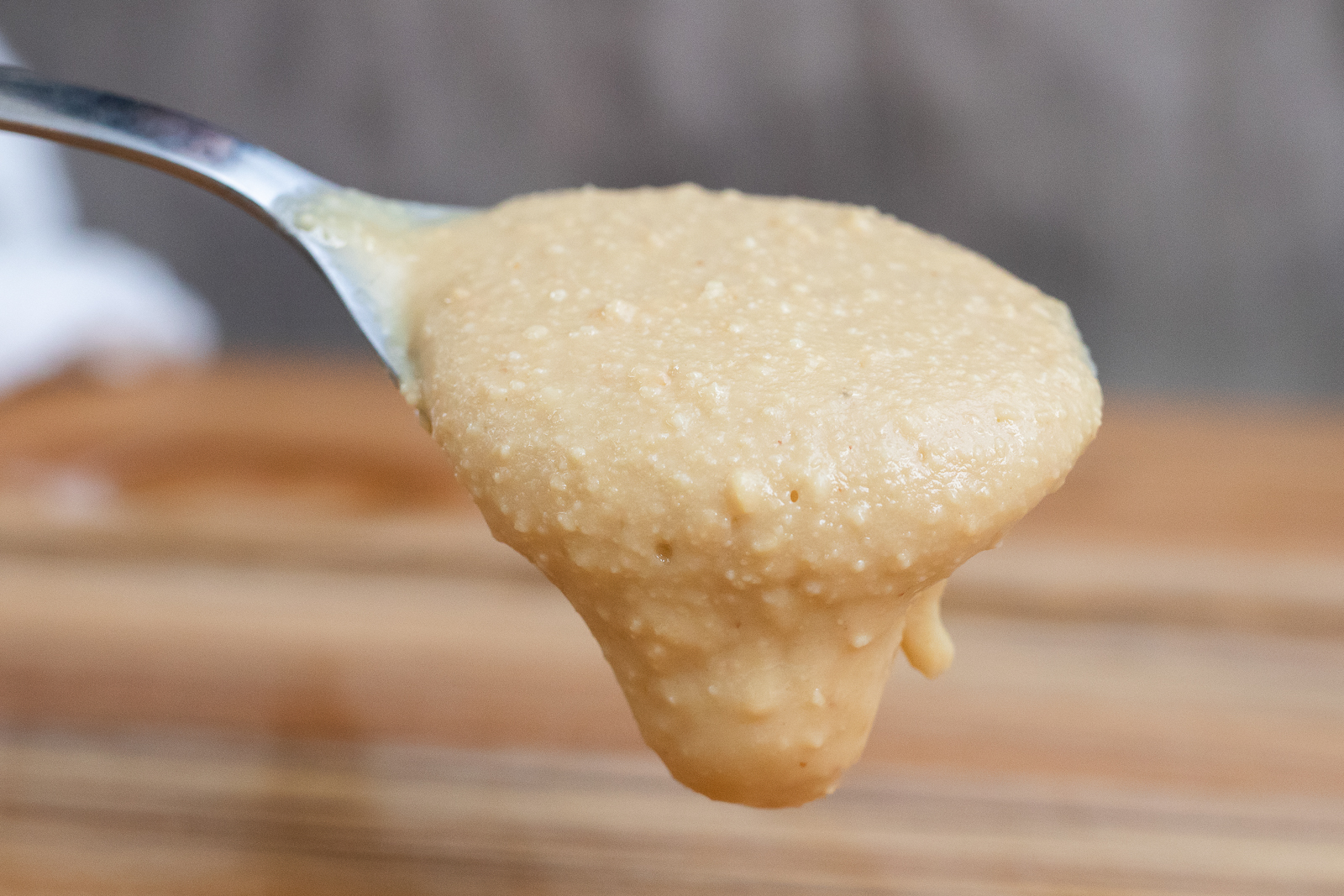 Peanut butter from the Vitamix was thicker, and more akin to the type you can buy freshly ground at the store. Photo: Michael Hession

The Vitamix 5200 is our perennial favorite blender because it’s simply better at blending foods and liquids. Thanks to its tamper, the Vitamix also purees thick mixtures in half the time the Blendtec takes. On top of all that, the 5200 typically costs about $100 less than the Designer 675. However, if you’re more interested in destroying electronics than making delicious smoothies, sauces, and soups, we would recommend the Blendtec.

To read more about why the Vitamix 5200 is our top pick, and to see how it fared next to other high-powered blenders, take a look at our full guide to the best blenders.

This guide may have been updated by Wirecutter. To see the current recommendation, please go here.

Replicating Blade Runner: Why the adventure game classic is so tough to remasterWesley Yin-Poole, EurogamerNightdive Studios announced earlier this year...

The Morning After: Apple enters the 5G era with the iPhone 12

New iPhones have arrived, so as you would expect, while we reviewed the iPhone 12 and iPhone 12 Pro, the...

US judge stands firm in decision to block ban on WeChat

The judge who blocked the Commerce Department’s order to remove WeChat from US app stores was unmoved by the new...

We spend our weekdays rounding up all of the hottest daily deals each and every day, but on weekends we...

Facebook’s and Twitter’s CEOs, Mark Zuckerberg and Jack Dorsey, have voluntarily agreed to attend a Senate Judiciary Committee hearing on...